The MoD, via DSTL Porton Down, has recently issued a voluntary transparency notice through the EU Journal for the;

AEP stands for Attenuating Expanding Projectile, others might know it as a baton round.

Tony Williams has a comprehensive page on Less Lethal Ammunition at his website, click the link below to visit

The Home Office conducted a market review a few years ago;

View this document on Scribd

The Heckler and Koch L104A1 and L18A1 Optical Sight is in service with the MoD and many police forces in the UK, a rifled derivative of the HK69A1. They are 37mm calibre to ensure 40mm lethal grenades cannot be accidentally fired in situations where they may be in the same environment, that of course, would not look good on the TV!

Used in Northern Ireland for some time they have yet to be used on the mainland, although they were authorised for use in the recent civil unrest across the UK. 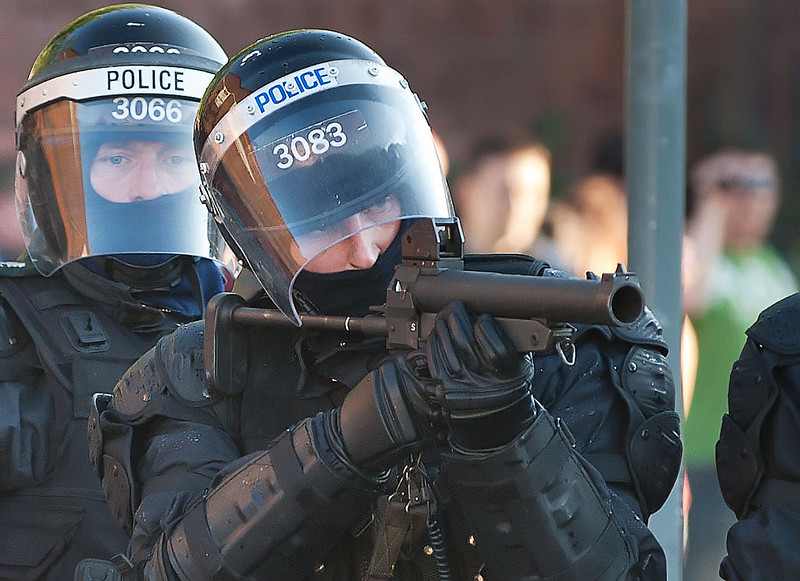 As Tony Williams states, the current in service round is the L60A1 AEP round, introduced in 2005 to replace the L2A1

To ask the Secretary of State for Defence if he will list the (a) type and (b) quantity of ammunition which was acquired from outside the United Kingdom in 2004–05; and what the source was in each case.

The information in the following table relates to general ammunition sourced directly from overseas for the financial year 2004–05. It does not include missiles, torpedoes or ‘smart’ munitions. The total figures provided amount to less than five per cent. of the volume of general ammunition purchased in 2004–05.

Details of ammunition sourced specifically for special forces have been omitted from the list for security reasons.

So that looks like over a quarter of a million round of the  L21A1, just as it was going out of service and just over 34,000 of the newer L60A1 rounds.

The answer also showed 50,000 of the older L5A7 ‘plastic baton’ rounds being purchased, even more curious, perhaps they are for training?

A Parliamentary answer from 2008 describes the training requirement

Mr. McNamara To ask the Secretary of State for Defence what the means are of assessing a candidate applying for a competency qualification to fire the L104A1 anti-riot gun; what the minimum number of rounds is a candidate must fire to complete the training course; how many rounds must be fired in test conditions; what the pass score is; what the percentage rate of successful candidates is; and how many hours’ training is required before a candidate is ready to take the test. [80625]

Mr. Ingram All soldiers are, by virtue of their training and experience, considered capable of being trained as a baton gunner. Individuals do not apply to take the L104A1 competency qualification, rather, assessments are made by commanders who then choose who should be trained as a baton gunner. To complete the L21 training course, a minimum of 20 rounds must be fired of which five rounds must be fired under test conditions achieving a grouping of 200mm. There is no score pass or percentage pass rate as such, as training is continued until the standard has been achieved. In addition to the basics of small arms training, it takes a further five hours to train a soldier to safely handle and fire a baton gun.

There is a huge amount of political concern about the use of baton rounds and other less lethal technologies because as history has shown, they can still be very lethal.