Despite the A400M Atlas not actually being some behemoth when compared to the C130J it is true that in enduring operations many of the intra-theatre air transport flights will be used for time sensitive cargo that is much below the maximum weight and volume of even the c130J.

This opens up a potential requirement for a smaller aircraft.

Any view on whether such an aircraft would be worth investing in would come down to that balance of the costs of such an aircraft fleet and the cost of using the A400M Atlas at payloads far below its capabilities.

One way of looking at this is instead of a smaller compliment to the A400M, a larger and cheaper to operate Chinook, without the vertical lift ability of course. That said, if we did want a cheaper alternative to the Chinook for air transport of slung cargo then we would do well to shift our gaze to the unmanned K-Max, one of those programmes I have been following for a long time and commenting on regularly, the first time here.

For years ISAF has been using contractors to provide air transport and air despatch using smaller aircraft like the Airbus C212’s and AN25’s. The development of low cost air despatch /air dropping equipment has allowed these cheap aircraft to be of much greater usefulness.

Studies by the USAF and Army have shown that for a very high percentage of short range, intra theatre transportation tasks in ongoing operations the payload utilisation figures are very low. This prompted the purchasing of the C27J as a replacement for the ancient Shorts Skyvans but they have since been put up for sale, the Royal Australian Air Force snapping up a few of them as a Caribou replacement.

I can see two distinct categories here, proper military transports with good short field performance and the ability to carry 463L pallets for conventional or airdrop delivery and something smaller than that, used mainly for personnel and very light stores.

What seems to delineate these two categories is the existence of a rear ramp so the equipment described below is split into ramp equipped and non ramp equipped types.

Looking at the options below I think I could see a use for the C235/295 but only if the Maritime Patrol version were also utilised, the BAE146 seems a sensible addition and the Twin Otter might provide a useful replacement for the Defenders.

The ideal payload bracket would be as that of the Chinook, about 5-10 tonnes, 20 -40 seats but with higher volume for low density cargo and air dropped pallets.

The C27J Spartan is an updated version of the G222 and has some commonality with the C130J. Of course the RAF C130J’s will be going out of service but one wonders if some aspects of the C130J logistics and training capability might be reused in some way.

The cargo hold can carry up to 60 personnel, 46 paratroopers, 3 463L pallets, 36 stretchers or 6 airdrop bundles. Its cargo box width allows light vehicles to be carried like the Land Rover, Ocelot, Jackal and Viking for example, although these would be the exception, pallets and personnel being the rule.

Other missions for the C27J would be maintenance of parachute drop capabilities, which has proven difficult in recent times due to a lack of airframes and special-forces support.

View this document on Scribd

Although now put on hold the US had intended to use the C27J as a basis for the AC-27J Stinger II gunship variant, an interesting proposition that would deliver a serious capability upgrade for UK forces although in the previous post on the A400M, the Atlas might be a better option.

It is very difficult to gauge an in service cost but the US sale would indicate about £30million each including logistics, simulators, training etc.

The C27J is a dedicated military tactical airlifter; it is not multi role and would seem to be the most expensive in this group but what it does, it does very well.

The CASA Airbus C212 is what one might call a mature design with many in service across the world.

Able to carry 25 personnel, a lightweight vehicle or just under 3 tonnes of stores with a range of 435km it is optimised for airdrop and short field operations.

With a maximum payload of 6 tonnes, 4 463L pallets, 51 passengers or 35 paratroopers it has a much greater capacity than the C212.

CASA and Airbus continually stress the low operating cost of the C235 and the US Coast Guard use them in the maritime patrol role.

The C295 is basically a stretched version of the C235, sharing the majority of the systems and components.

Whilst the C295 might not have the same short field performance as the C235 or definitely not the C27J it has the benefit of a large cargo hold which is optimised for the kind of intra theatre short and frequent flights that characterise this requirement.

Where the C235 and C295 lose out to the C27J is in cargo hold height and width which makes it less suitable for the outsize cargo but the flip side is the C295 (especially) has benefited from Airbus developing the basic aircraft with a number of specific equipment configurations.

This is a major plus point for the C295 if we can sacrifice some rough field performance and outsize cargo capability.

One of the great strengths of the C295 MPA is its versatility, the rear cargo door and palletised mission systems allow the same aircraft to be used for a number of roles. Standard 463L pallet compatibility means that in an expeditionary deployment it can carry its own spares or other stores, as an example.

In conjunction with IAI, Airbus have even developed an AEW version and have proposed a gunship.

For completeness there is also the Antonov AN-74, Sukhoi SU80 and Pzlmielec M28

The M28 is perhaps the most sensible option of the three, although I have a sneaky admiration for the AN74.

There are a number of non ramp equipped designs but there utility is compromised severely by the inability to offload pallets easily.

As you will know, the RAF has recently obtained under a £16m UOR a couple of BAE146’s to support the Afghanistan air bridge.

The 146 is actually an impressive aircraft and still in widespread service, including with the RAF.

An earlier version even progressed to a demonstrator stage 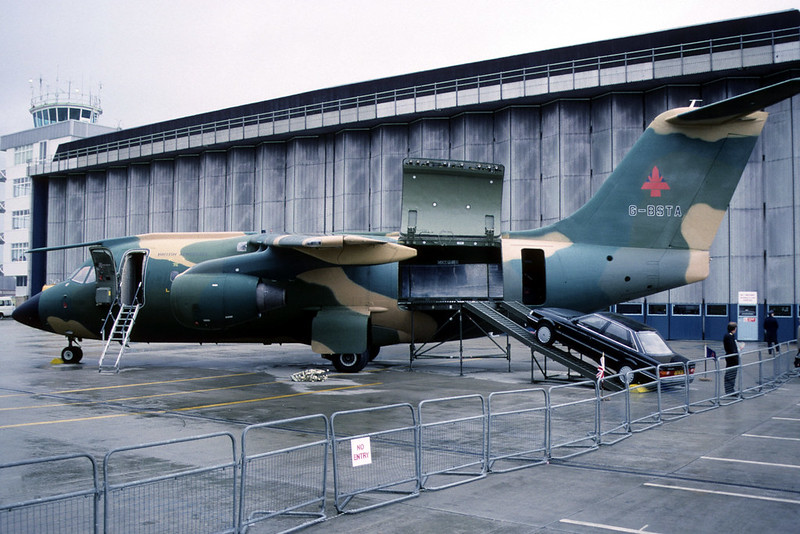 The DHC-6 Twin Otter is an old favourite, hard as coffin nails, versatile and in possession of short field performance that shames most of the aircraft in this post.

Watch this video and be amazed

Viking Air of Canada recently resurrected production of the venerable DHC Twin Otter and have been getting some serious orders from customers as diverse as the Vietnamese Navy and Zimex Aviation in Switzerland.

The Series 400 has many improvements over the old model and its versatility is obvious; wheels floats or skis and the environmental hardening to operate in these diverse environments mean its legendary toughness has been retained.

Performance highlights are as follows;

Viking have also introduced  the Guardian 400 specifically for the surveillance, security, sovereignty and search and rescue market that has an extended range fuel tank (10 hour operations) and an electro-optical and infrared imaging turret which can be displayed on either the flight deck Honeywell Primus Apex Multi Function Display, or on a separate cabin console.

The base aircraft can also be fitted with skis and floats.

This is the last part of the 5 part series on the A400M Atlas, hope you have enjoyed it!