The Amazing Jerry Can

Bulk fuel was transported in fuel tankers and the 55-gallon drum used as an intermediate storage vessel. Neither of these methods was suitable for use closer to the combat area, the fuel tanker was vulnerable to enemy fire and the drum could not be manhandled or carried easily on smaller vehicles or in aircraft.

In the Desert War by Alan Moorhead, he describes the British Army petrol can is less than glowing terms;

The Germans designed what appears to be the best (petrol) container for the desert – flat, solidly built holding five gallons – it could be used over and over again, Known to use as the Jerrycan. The great bulk of the British Army was forced to stick to the old flimsy four gallon container, the majority were only used once. We could put a couple of petrol cans in the back of a truck, two hours of bumping over desert rocks usually produced a suspicious smell. Sure enough we would find both cans had leaked.

This was a criminal waste of a very precious resource and very dangerous, diesel was not widely used with volatile petrol being the norm.

It also caused considerable problems when carried on ships.

The book Christmas in Archangel: A Memoir of Life in the Merchant Navy 1939-1945 by Ivan Hall describes what happened when they were damaged in the hold of a ship;

Number one hold smelled ominously of petrol and when the tween deck hatch covers were removed it was overpowering, clearly a problem. No smoking notices were went up, no Army boots were allowed and all fire precautions that the Army and we could muster were put in place. Those working in the hold soon began to suffer from nausea and had to be hauled out. Clearly there was petrol awash in the bottom of the hold from the crushed tins. We had no facility to pump it out, petrol vapour in the ships pipelines could be lethal. Nor could the Army provide any solution.

To get out the tins that were intact, the technique finally used was for four squaddies in plimsolls to stand on the edges of a square wooden pallet and craned into the hold. There they would stack as many cans on the tray in as short time as possible as they could – usually a couple of layers – and immediately craned out before they succumbed, whereupon another group of four take their place. They deserved medals.

In use with the British Army were two designs holding 2 and 4 gallons respectively.  The smaller container was sturdy but very expensive so consequently, the 4-gallon container was much more widely used. It was constructed of pressed tin plate and because of the insubstantial construction was nicknamed flimsies.

The single sharp-edged handle, lack of expansion dimples and screw cap further conspired to make it an epic ergonomic failure.

The Afrika Corps, on the other hand, were able to use their Wehrmachtkanister, as described above a wholly superior product.

Not only was it sturdy it was also cleverly designed, the handle, for example, enabled carriage by one man or two. In a bucket brigade style line, the handle design allowed very quick movement and it was so designed that two empties could be carried in one hand.

The spout could even be opened with one hand without tools and the can shape was such that an air pocket remained, enough to make sure a fully laden can float if dropped in water. It was also fitted with a plastic liner.

The development of the Wehrmachtkanister is worthy of a post on its own but they were designed in 1937 by the chief engineer (Vinzenz Grünvogel) of the firm Müller of Schwelm, go Google him!

Fuel leakage and wastage in North Africa was enormous, estimated by General Auchinleck as being over 30%. Despite the usual bureaucratic indifference sufficient ‘liberated’ German containers and British built Jerrycans (over 2 million) were ready for the latter stages of the allied offensive.

The US Army would also adopt the German design after studying reports from the Eighth Army in North Africa although it had reportedly rejected the original German design.

They were used extensively during the liberation of Europe but many Allied troops were somewhat less than disciplined with returning the empties, this resulted in an acute shortage as they were strewn across Northern France, used as stepping stones in mud or for almost anything other than transporting fuel. The US Army even resorted to offering prizes to French schoolchildren for the recovery of empty jerrycans, over a million were recovered by this method alone.

Mechanical filling and handling devices were designed including a device called the ‘Rotary Cow’ which could fill 720 cans per hour. To appreciate the scale of the tactical fuel operation, by October 1944, the allies were moving over a million gallons a day, most of it in jerrycans, to the advancing armies.

Without these cans it would have been impossible for our armies to cut their way across France at a lightning pace which exceeded the German Blitz of 1940.

Sven at Defense and Freedomcites the German fuel can as a small innovation but one that had a large impact;

The use of petrol cans and barrels instead of dedicated tankers also had a huge effect on logistical demands. Fuel demand varies a lot between heavy fighting (breakthrough) and rapid movement (pursuit, exploit) phases. This wasn’t well-understood till well into WW2.

A simple truck could load either ammunition, fuel or almost any other supplies while dedicated fuel trucks couldn’t even load drinking water. This specialisation disadvantage persists till today and suggests that an army should have enough dedicated vehicles for basic supply needs and versatile carriers for the additional, situation-specific supply needs.

Their impact should not be underestimated in any way.

Rotopax and Scepter have continued to innovate, Rotopax for example provide moulded and stackable containers that can be integrated with all manner of vehicles and secured with twostlocks.

Colour and stamping are used to denote contents, red for petrol or CIVGAS, blue for DIESO etc 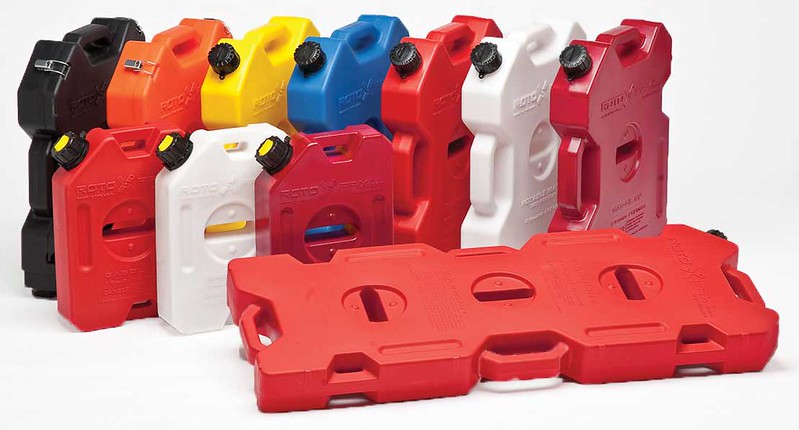 We still use jerry cans today but there have been some changes. Most metal cans have been replaced with the plastic variety, for both fuel and water and whilst they are used for small plant, UAV’s and generators for example, vehicle use is limited to those operating beyond the reach of the tankers and other bulk fuel systems.

With the increasing fuel consumption of modern equipment and the greater sophistication of bulk handling equipment like the UBRE POD’s and its replacement, the Unit Support Tanker and the Oshkosh Close Support Tanker, Jerry Cans for fuel are used much less.

The RAF, RN and Army air Corps no longer routinely use them for fixed-wing aircraft and helicopters but use bulk tankers instead like the Oshkosh Tactical Refueller or MAN truck pictured below.

The Oshkosh Tankers replaced the Multidrive tankers, click here for a detailed look.

The 20L plastic water carrying jerrycan, familiar to many, even has a role to play in Army fitness standards

In moving to bulk refuelling equipment on specialist vehicles we have no doubt improved efficiency, reduced personnel requirements and created an altogether simpler, safer and compliant system but it has a very simple downside. Jerry Cans or other containers can be carried on any vehicle but bulk fuel ties the Army to specialist vehicles, we only have 81 UST’s for example.

An interesting trade-off between efficiency and operational resilience.

From Kanister to Jerry Can

Olive Drab on the Jerry Can

Images and a load more on the German version